Telluride, CO – A Trip Back In Time With Modern Day Flair 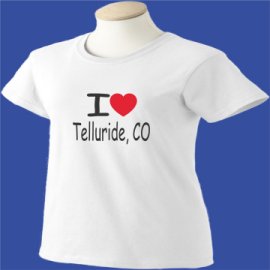 Full disclosure:  I live here.  And I love it here.

If you are a skier, while you may have not yet made it to the slopes of Telluride, Colorado, you have surely heard of the place.  If you are not one for the slippery slopes, you may never have heard of the place at all.  Time to turn your attention to the San Juan mountains.

Tucked away in a box canyon, roughly a six+ hour drive from Denver, visiting Telluride is taking a step back in time, without surrendering your modern day comforts.  What was long the summer camp for the Ute Indians during the 1700s, became a tent town in the late 1800s when silver and gold were discovered up above.  By 1878, those tents had turned into a bustling, rowdy mining town filled with the expected saloons, brothels. and homes.  In fact, in 1887 a local paper once wrote, “Ouray has 4 churches and 14 saloons. Telluride has 10 saloons and plans for a church….” 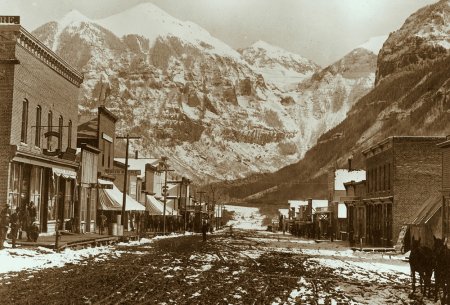 What makes Telluride so special still today is the care taken by the town to preserve its history, it’s iconography, it’s look.  A walk down the main street is a walk back in time. Original buildings – the bank, the Sheridan Hotel, Sheridan Opera House, the Last Dollar Saloon (known locally as The Buck), and on and on, lovingly maintained, still stand.  The original San Miguel Bank building is where Butch Cassidy first turned bank robber.  Homes, while old, are incredibly expensive, and while owners may renovate the insides as they see fit, the facades must be maintained in their original state.  Just off the main drag, Popcorn Alley still exists, its buildings stand, albeit not in their former brothel-y glory.  They are now occupied by shops, apartments, restaurants, yoga studios. 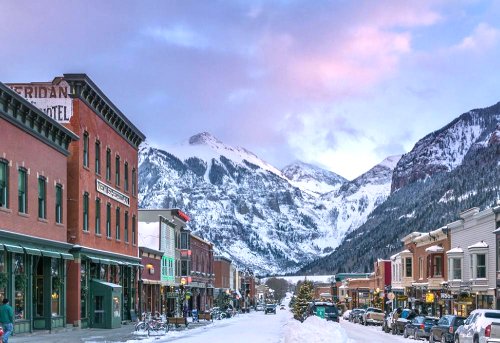 “Due to its significant role in the history of the American West, the core area of Telluride was designated a National Historic Landmark District in 1964. This listing is the highest level of historic status available to sites designated by the United States Secretary of the Interior. Telluride is one of only four other Colorado communities with this honor. The sites are so special that, in theory, they are eligible for consideration as national parks.” 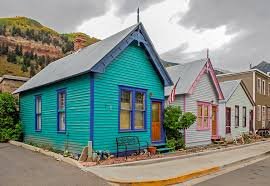 You can stay in the New Sheridan Hotel (1895, so named “New” as the original burned in 1894), eat at the Flora Dora saloon, wander the side streets and stumble upon the old Red Light District and some of the remaining “cribs” used by prostitutes back in the heyday, but now occupied as small, brightly colored houses.  Walk to the Telluride Museum, which used to be a mining dorm, then the first hospital, then the home of the town’s history.  Take in a movie at the Nugget Theater – housed in the original Nugget Building (1892) that once housed a bank and power company, then a grocery, a drug store, and the Elks Lodge, until the grocery was turned into the theater back in 1935.  Small, and only one movie comes to town at a time – you can feel the history all around you as you take your seat. 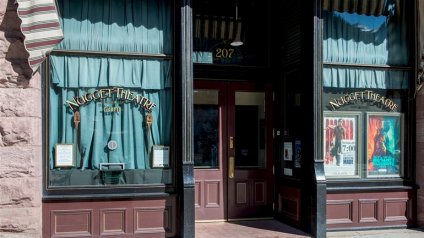 Once silver crashed and mining began to dry up, the town languished and shrank for decades.  But in 1968, white gold (snow) turned Telluride into what is now consistently ranked as the country’s #1 ski destination when entrepreneur Joe Zoline came and began building what he called a “winter recreation area second to none.”  That included 5 lifts and suddenly the Telluride Ski Area was born and the city itself reborn.  Fast forward to 1978 when Zoline sold the ski resort to Ron Allred and Jim Wells who envisioned a “pedestrian-friendly, European-style resort village” above the town of Telluride. 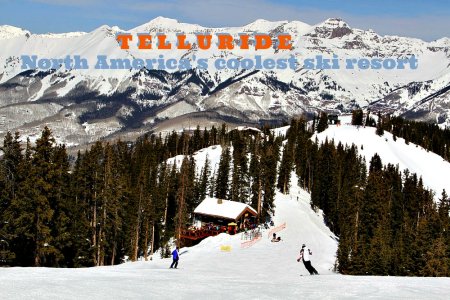 And so Mountain Village was born.  Now connected to historic Telluride by the country’s first and only free transportation of its kind, Mountain Village is the fairy land where ice skating, hotels and resorts, homes, restaurants, and access to some of the best ski runs in the country are found.  And although Telluride is consistently rated #1, it is casual and comfortable.  No fur coats and labels like you may see in Vail or Aspen.  Rather, dressing up for a night out at Cosmo or The Chop House or The National means wearing your nice jeans.

As I said at the beginning, I love it here.  The scenery, the people, and the history of old Telluride combined with the fairy tale of Mountain Village.  It is a perfect escape, and I get to live here.

While skiing takes center stage in most people’s minds, truth be told, summer is a busier time than winter.  Yes, it is a wonderfully scenic drive to get here, but the draw each year when the snows melt are the endless succession of festivals covering all manner of tastes, interests, activities.

For instance, this weekend is Balloon Festival, which rolls into Wild West Fest, then WOW Festival.  Coming up this summer are the ever popular Bluegrass Festival, Wine Festival, Blues and Brews, and on and on – again, something for everyone, and an opportunity to immerse in a town where the people are down to earth, the accommodations welcoming, and the food varied and delicious.

Take A Look At What’s Ahead This Summer – CLICK HERE 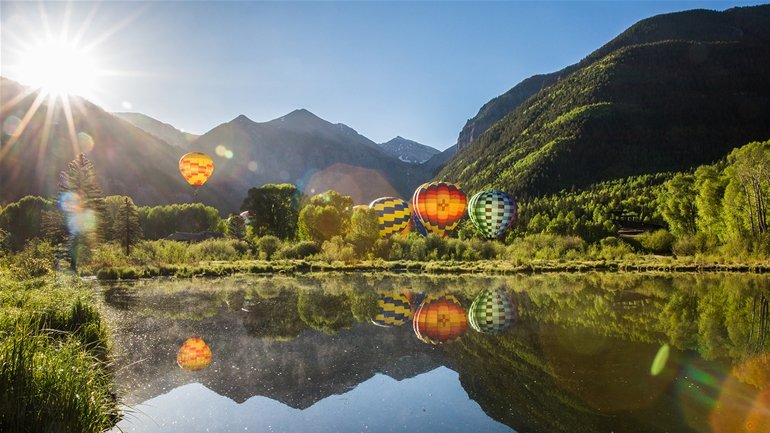 Places to stay in Mountain Village include the Inn At Lost Creek (rated #1 in service in the United States), the Peaks Resort and Spa – a year round favorite for its sweeping views, ski in-ski out location, and world class spa, the Madeline Hotel, and a wide range of rental opportunities.  Down in Telluride, the Sheridan offers 26 wonderfully appointed rooms, while the Dunton Town House (rated #4 in the USA by Conde Nast) is a cozy stay just off the main street and near the gondola station.  Smaller hotel properties are available and as up in MV, rental properties abound. 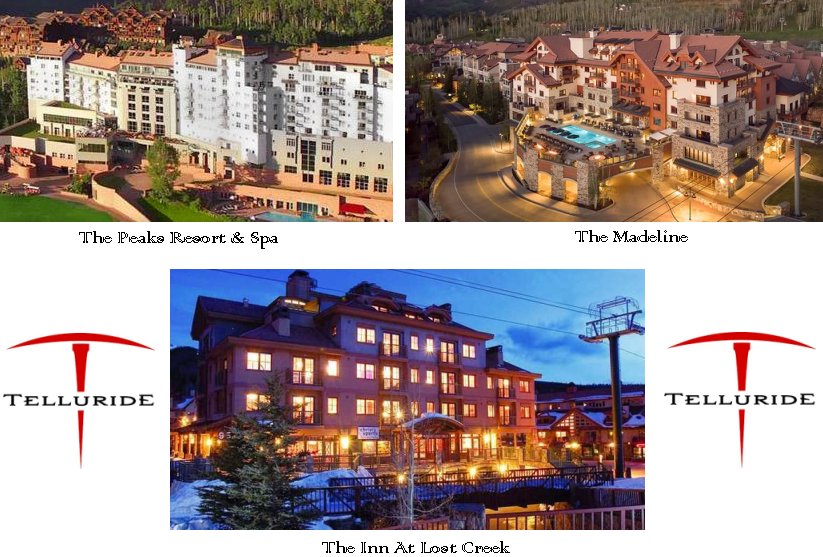 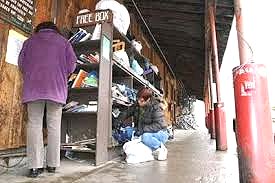 Part of the charm of Telluride can be found in its dedication to staying local.  You won’t find fast food places (the closest McDonalds is 75 minutes away); unlike Aspen there is no street full of Gucci, Tiffany, Prada, etc; Places the locals swear by include Brown Dog Pizza for great food and sports watching, the Sheridan Saloon, Esperanza’s for Mexican (hidden down an easily missed staircase on main street), the Toggery for cool clothing for men and women, and the Free Box.  The Free Box is a Telluride institution.  Just off main street it is a collection of wooden shelves where locals deposit items they are done with (think ski boots, clothing, books, toys, carseats, etc) and anyone can come along and adopt them as their own.

As Telluride is a year round destination, there are endless opportunities for outdoor adventures – hiking, mountain biking, fishing, rafting, heli-skiing, cross country skiing, and golf are available.  At roughly 9,000 feet altitude, Telluride and Mountain Village are literally breathtaking.  Even the fittest of visitor can find themselves outpaced by the lack of oxygen.  A single flight of stairs leaves one huffing and puffing.  Headaches are common for visitors, as well as temporary digestive issues, but worry not, your body quickly adjusts.

Being located in the mountains, wildlife does abound here.   It is not uncommon to see a herd of elk chilling on a golf green in the morning, several deer relaxing among the Aspens, coyotes wandering, and there are even occasional black bear sightings. 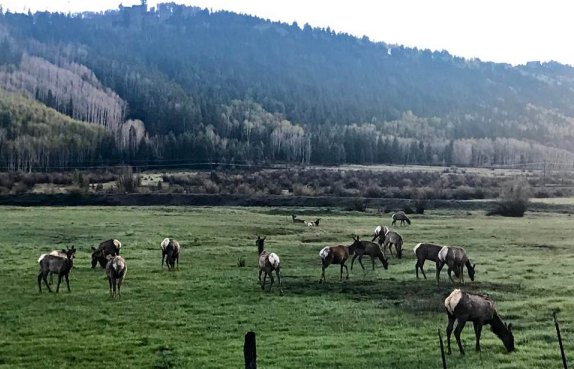 Sunrises and sunsets are some of the most incredible I have seen, each one having you reaching for your camera, only to have a better one appear the next day and night.  It truly is a magical place. 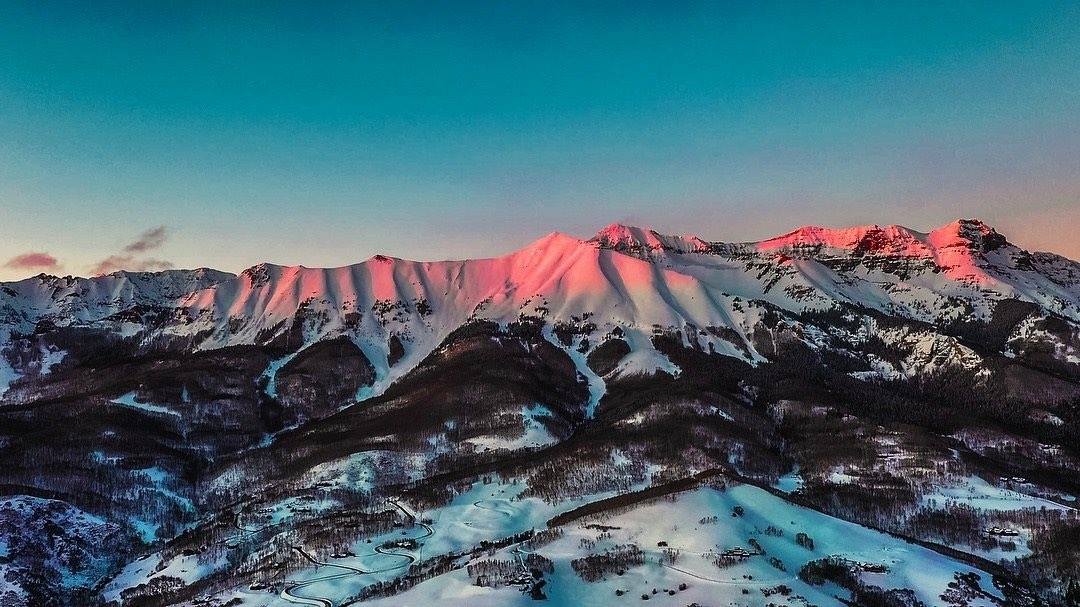 So next time you are scanning the map for a new adventure, look to Colorado to a tiny town with a big history and an even bigger heart – Telluride.  We’ll be waiting for you.

Now, excuse me, but I have to get ready to go see this tonight – the hot air balloons line main street for what is called The Glow. 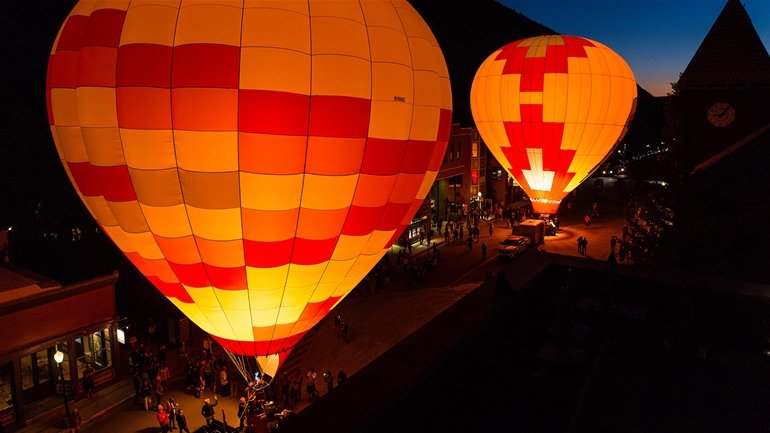 I love it here.

No matter where your daydreams may take you – Archer Luxury Travel can turn them into reality.  Your imagination is the only limit.  Whether it’s hiking in the San Juan mountains, sailing the deep blue sea, luxuriating at an all-inclusive resort, or indulging your inner child with an incredible package to Disney, let DeeAna help you plan your next great escape. Contact archer@archerluxurytravel.com